A lovely street to start your tour of Rome’s historic center is Via del Governo Vecchia. Between Piazza Navona and the Vatican, this street is full of caffes, boutiques and provides a classic cobblestoned walk in Rome.

View Rome: Via del Governo Vecchio in a larger map 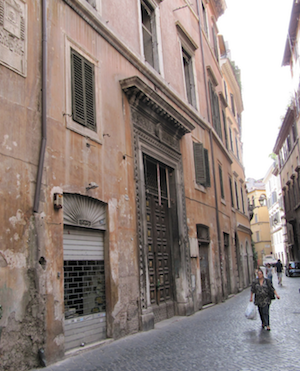 When walking this street you’ll often hear desperate travelers looking for a specific address, such as a hip boutique or famous pizza spot, exclaim “che confusione!” as they loook for an address. This confusion is caused by the street numbers continuing consecutively by side, from Piazza d’Orologio on the left side toward Piazza di Pasquino, where they then continue on the other side numbered consecutively back to the beginning in Piazza d’Orologio. So unlike typical street numbers with odds and evens on opposing sides, Via del Governo Vecchio is numbered successively by side, with the numbers counting up on left side and down on the right side – working opposite one another on each side as you walk. The beginning of Via del Governo Vecchio you’ll find the first number and last number across from one another.

Via del Governo Vecchio begins in the Piazza d’Orologio, named after the Borromini designed corner clock tower. As you walk look out for the 16th century fresco on 104, which shows the buildings owner dictating to his secretary, a sure sign some things never change. Another illustration that some things never change is the building plaque on the corner of Vicolo dell Cancelleria from 1755 that reads, “By order of the District President it is forbidden to throw any garbage whatsoever into this alley, as prescribed by public proclamation October 23, 1755.”

Piazza di Pasquino is the end of Via del Governo Vecchio where you’ll find the statue of Pasquino, Rome’s first talking talking statue named after a tailor named Pasquino who was the first to post his current affairs witty commentary onto this sculpture shorty after its installation here in 1501. Pasquino the tailor was privy to behind the scenes Rome and Vatican gossip given his position as tailor to the Vatican. His commentary stuck to the statue led to its nickname, “Rome’s talking statue.” The sculpture itself is from the 3rd century B.C., and is thought to represent the torso and head of Menelaus, king of Sparta and husband of Helen of Troy. Bernini described Pasquino “the finest of all antique sculptures.” The English wordpasquinade, which means a piece of satire, is derived from this statue.