A common question is what are the most important Rome historic churches. The obvious answer is the major basilicas: Archbasilica of St. John Lateran, St. Peter’s Basilica, Basilica of Saint Mary, Major Basilica of Saint Paul Outside the Walls.

There is a another tier of Rome historic churches that are interesting and include priceless works of art by Michelangelo, Bernini, Caravaggio, Raphael, among other masters.

Located in the famous Piazza Popolo, the Basilica of Santa Maria del Popolots walls and ceilings are decorated with paintings by some of the greatest artists ever to work in Rome: Raphael, Gian Lorenzo Bernini, Caravaggio, Alessandro Algardi, Pinturicchio, Andrea Bregno, Guillaume de Marcillat and Donato Bramante.

Located across the square are the “twin” churches of Santa Maria in Montesanto and Santa Maria dei Miracoli.

Church of the Gesu

The Church of the Gesu may look familiar when you stumble upon it. This is because its baroque facade is the model used on many Jesuit churches through the Americas.

The church was built on the same spot as the previous church Santa Maria della Strada, where Saint Ignatius of Loyola, the father of the Jesuits, had once prayed before an image of the Holy Virgin. This image, now adorned with gems, can be seen in the church in the chapel of Ignatius on the right side of the altar.

Art work inside the church includes a bust of Cardinal Robert Bellarmine by Bernini. The sculptor prayed daily in the church. It is located in sacristy is on the right.

Another beautiful church across the way from Church of Gesu is the Dominican Order’s Santa Maria Minerva.

The church’s name derives from the fact that the first Christian church structure on the site was built directly over the ruins or foundations of a temple dedicated to the Egyptian goddess Isis, which had been erroneously ascribed to the Greco-Roman goddess Minerva.

Minerva is the only extant example of original Gothic church building in Rome. Behind a Renaissance style façade the Gothic interior features arched vaulting that was painted blue with gilded stars and trimmed with brilliant red ribbing in a 19th-century Neo-Gothic restoration.

Among several important works of art in the church are Michelangelo’s statue Cristo della Minerva, also known as Christ the Redeemer or Christ Carrying the Cross, is a marble sculpture by Michelangelo Buonarroti, finished in 1521, located to the left of the main altar.

In the Minerva Piazza is the monument called Pulcino della Minerva. The Elephant base is a Bernini sculpture. The obelisk atop is from Egypt. From there around the corner is Pantheon.

Located right between Piazza Navona and just around the corner from the Pantheon is San Luigi dei Francesi. It is the national church of France in Rome. Inside in the Contarelli Chapel you’ll find three of Caravaggio’s masterpieces about the life of St. Matthew. This includes the three world-renowned canvases of The Calling of St Matthew (on the left wall), The Inspiration of Saint Matthew (above the altar), and The Martyrdom of Saint Matthew (on the right wall). These three are Caravaggio’s most famous works.

If you like espresso you should stop in at Sant’Eustachio or Taza di Oro. Sant’ Eustachio is just down street from “French Church”. Both are considered best espresso in the world! To have an espresso first go to register to pay.  They will give you a little receipt.  Then go to bar and put that receipt on the counter.  The barrister will take it and make your espresso.  Do this without confusion and they’ll think you are an Italian.  You may also place a 25 or 50 coin on top of receipt for the barrister’s tip.

Italians don’t drink milk in coffee after 10A. Do this and they’ll know you are not Italian…

Yes The Pantheon is Catholic Church. It was built around 100 AD as a Roman temple. Among those who are buried there is the painter Raphael, two kings of Italy Vittorio Emanuele II and Umberto I, and Umberto’s wife Margherita, whom the pizza margherita was first made and subsequently named.

The Pantheon is an architectural gem. It is one of the best-preserved of all Ancient Roman buildings, in large part because it has been in continuous use throughout its history, and since the 7th century, the Pantheon has been used as a church dedicated to “St. Mary and the Martyrs”, but informally known as “Santa Maria Rotonda”. The square in front of the Pantheon is called Piazza della Rotonda.

Piazza di Sant’Ignazio designed by Raguzzinni 1727 is like a stage set that comes to life each day. The building facades, which are illusions, like Andrea Pozzo’s painted “Dome” of St. Ignatius’s ascent into Paradise inside Sant’Ignazio, a must see point of interest in Rome. Stand on circular marker set into floor where nave meets cross, then move forward to alter and look up again to get for effect of illusion of false dome.

Around the corner from Ignazio Loyola is Hadrian’s Temple (Tempio di Adriano) in Piazza Pietra.  The ancient Temple is made of stone with giant columns.  Then just around the corner form there is Piazza Colonna, where the Colonna di Marco Aurelio stands. This column is carved depicting scenes of ancient Rome’s military history.

Basilica of Sant’Agostino contains works of art by Caravaggio and Raphael. In the Cavalletti Chapel (first chapel on the left), is an important early Baroque painting by Caravaggio. There is also a fresco of the Prophet Isaiah by Raphael on the third pilaster of the left nave.

The church also contains the tomb of Saint Monica, mother of Saint Augustine. 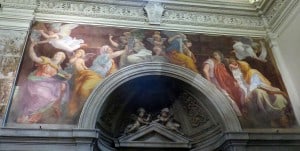 Located on charming little street Via della Pace, it is not an easy find. Once there stroll through the 15th century doors and you’ll find a Raphael. Raphael began to fresco the Sibyls receiving angelic instruction (1514) above the arch of the Chigi Chapel, commissioned by Agostino Chigi, the papal banker.

When you are in this are stroll over to Via dei Coronari and Via del Governo Vecchio. You’ll find charming boutiques on both streets.

Around Piazza Navona and Via del Governo Vecchio is Virginiae and one of my favorites Da Francesco located at Piazza del Fico, 29, two great little lunch or dinner trattoria.  Low key. Good food. Nice area. Nothing fancy. Da Francesco is open late which is nice in Rome.

San Clemente is not only a Rome historic church it is a time machine into 2000 years of Roman history. Under the current church, which boasts impressive mosaics, are excavations. This ancient church was transformed over the centuries from a private home that was the site of clandestine Christian worship in the 1st century to a grand public basilica by the 6th century, reflecting the emerging Catholic Church’s growing legitimacy and power.

The current church was built in the 12th century. Inside the postcard shop buy a ticket to descend two levels below.

The first layer is 30 feet below. There you’ll find a 4th century church. Go down another 30 feet and you’ll find a 1st century pagan temple that includes a shrine dedicated to the god Mithras, which was ancient cult that camle from Persia to rome in the 2nd century. All in that’s 60 feet below modern-day Rome. Believe it or not, if the rest of Rome were dug up similar layers would be found.

The Basilica and Monastery Agostiniano Santi Quattro Coronati is located a few blocks from San Clemente. This church was a fortified abby in the 4th century. It’s bell tower is said to be the oldest in Rome dates to the 9th century. Go here to find the Chapel of S. Silvestro and its frescoes painted in 1250 that depict scenes from the life of Constantine.

To gain access to this chapel you first must locate the convent sign (Monarche). There you’ll find a small window and a bell. Ring the bell and a nun will open the window. Give her a few euro and then she will buzz you into the chapel across the way. The chapel and frescoes are yours to enjoy. It’s likely you’ll be there alone, which is special among Rome’s noise.

After you can wander into the church. Sometimes a nun will be playing the organ. Then from the church you can ring bell to enter the cloister garden.

To see one of Bernini’s greatest works, The Ecstasy of St. Teresa, make your way to Santa Mari della Vittoria. It is generally considered to be one of the sculptural masterpieces of the High Roman Baroque. It pictures Teresa of Ávila.

Click here for more about Rome sightseeing and walking maps.