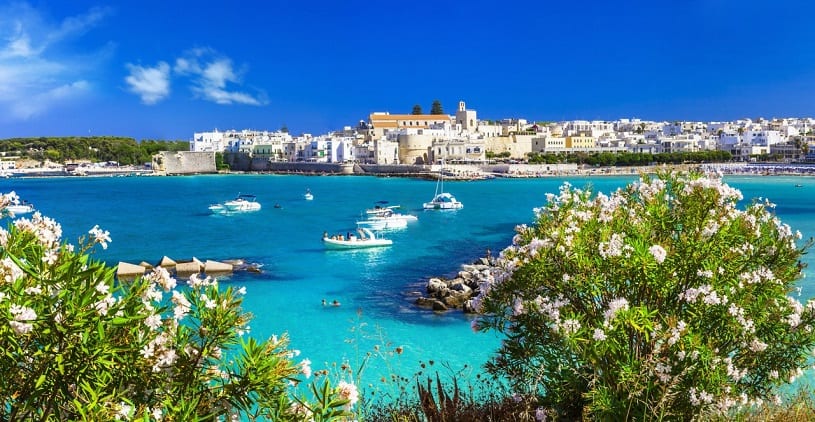 Puglia sightseeing explores where different Mediterranean cultures came together to form a combination of styles. The region’s traditions are strong. Puglia has two beautiful coasts. Some of the Puglia coast is rocky coves and dramatic cliffs. There is also plenty of beach space to go round for everyone. Puglia enjoys temperate weather.

Puglia’s towns are full of history. Lecce is Puglia’s main city. It is often called the “Florence of the South” and known as the “City of Sun.”

Puglia’s countryside is picturesque. The region is known for its great food and wine. Puglia produces nearly all of Italy’s olive oil and pasta, and is a paradise for wine-lovers and gastronomes. The two coasts also play an important part in the summer by helping to moderate the heat. Near the coast the average summer temperature is around 25ºC. Inland the summer temperature is 30ºC. For more about sightseeing in Puglia watch the video below. 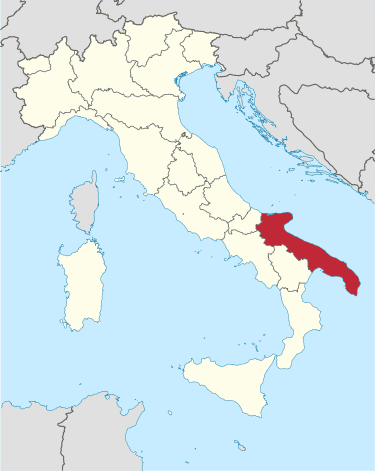 Puglia is full of sightseeing highlights and little towns. One of the most famous is Alberobello. This is where the famous cone shaped Trullo are located. These are now protected as a UNESCO world heritage site.

In Ostuni you will be able to enjoy a hilltop town to rival those of Umbria, with Frederick II’s 13th century Swabian castles creating an air of mystery amongst the ancient cobbled streets of the ‘centro storico.’ Ostuni is called “the white city” (‘la citta bianca’) because of the whitewashed houses of the Old Quarter. Any trip to Ostuni should start at Piazza della Liberta with the Town Hall (in an old monastery) and the church of St. Francis of Assisi. The old town has several beautiful churches (the cathedral and the church St. Maria Maddalena), but the highlight of Ostuni is its intricate maze of alleys and stairways where you can easily lose yourself and discover little treasures along the way.

Near the top of the hill, Ostuni Cathedral is an impressive and restful place to sit for a while during your exploration. From the outside, it appears to be the only building that is not whitewashed – with its green and gold tiled dome giving it a bit of an Eastern feeling. Near the cathedral, on the top of the hill, is a panoramic view down over the olive trees to the Adriatic. The sea view looks very tempting from up there.

Baroque squares, white-washed cobbled streets full of quaint cafes and shops, Ostuni is a fascinating place to visit and to immerse yourself in Italian life. On your way in be sure to stop off for a cafe latte in the town’s park, which boasts paths fringed by giant palms and a children’s playground.

The Baroque city of Lecce is known as the ‘Florence of the South.’  Here you’ll find Baroque architecture set among ancient Roman ruins.

Martina Franca is a town with a fascinating Moorish atmosphere and fantastic Baroque architecture yet a very modern buzz.

Bari is an unspoiled old city.

The Gargano Peninsula is a scenic part of Puglia. It is green and mountainous with lush pine forests, olive groves, and a dramatic coastline of white limestone cliffs, colorful sea caves, and long sandy beaches.

The Gargano Peninsula juts out into the Adriatic Sea and is called the spur in the heel of Italy’s boot. Most of the area is a national park, and aside from some seaside resorts, is unspoilt. It’s a popular summer spot for Italians, but in the off season you can have the beaches, forests, and hill towns to yourself.

North from Vieste to Peschici and south to Mattinata there are dozens of beaches to explore—sandy and pebbly, long stretches and hidden coves, some empty and others with sunbeds and cafes and water sports. You can explore these by car, bicycle (if you don’t mind hills), or boat. The sandiest beaches are between Vieste and Peschici while those further south are pebbly, often with dramatic cliff backdrops.

All the way south is Otranto. it is now a tourist town that retains true artistic and architectural jewels. The city tour can start from the the old town where you can enjoying an amazing panoramic views of the bay. Not far away is the Cathedral which features a mosaic floor representing the tree of life. The Byzantine church of St. Peter is another pearl of Otranto, which dates back to the ninth century and houses precious frescoes. A little further on, to protect the port, there is the Castle built by Frederick II of Swabia in 1226 and subsequently amended by the Aragonese and the Emperor Charles V.

For more information about trips to Southern Italy click here. Or return to the Italy travel guide.