Marche is quickly becoming one of Italy’s most popular destinations. Its location to the east of and short distance from Tuscany, Umbria, and Rome make it easily accessible. Its just south of the Emilia Romagna region. March sightseeing includes hilly vistas and a tranquil coast where you’ll find some of Italy’s best beaches. There on Italy’s east coast the Adriatic Sea laps up to long beaches and rocky cliffs.  Various national parks are available to tourists. Inland, the mountainous nature of the region, even today, allows little travel north and south, except by rough roads over the passes. Ancona is its capital and maybe the best known destination. Marche includes charming medieval hill towns like Urbino, lively beach towns such as Pesaro, and hidden escapes around Portonovo and the Monte Cornero peninsula. For more about Marche sightseeing watch the video below. 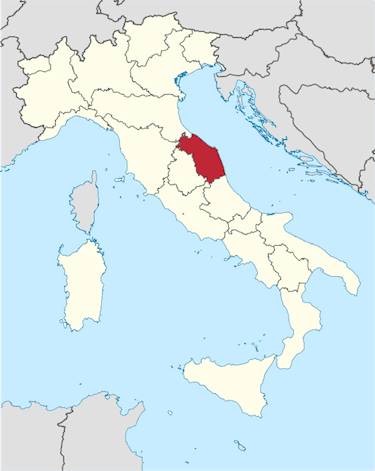 Ancona is the main city and port of Marche. Often visited by cruise ships, the main sites is the Duomo built in the 11th Century and the Arch of Trajan built along the ancient Roman Flaminia Way in 100 A.D.

Urbino is a UNESCO world heritage site. The town’s design and important artistic treasures attract visitors from all over the world. The main attraction is the Doge’s Palace – Palazzo Ducale – which includes the Marche National Gallery Museum. This museum includes some of the most important Renaissance paintings, including Piero della Francesca’s Flagellation of Christ. The famous artist Rafael was born in Urbino where you’ll find some of his earliest works.

Monte Conero is a peninsula with high bluffs topped off with strawberry trees, thus the name which is derived from the greek “komaros.” The area is a national park and known for its eco-friendly tradition. Nearby towns Sirolo sitting up on a bluff with giant views and Portonovo located down on the beach are popular summertime tourist destinations. Popular beaches around Monte Conero include Spiaggia di San Michele and Spiaggia dei Sassi Neri.

For more information about planning a trip to Italy check out ItalianTourism.us Italy travel guide.