The Grand Sicilian tour is an escorted tour of Siclly’s sightseeing highlights. Sicily’s culture is a result of distinct cultures and civilizations mixing over the course of history. Its culture combined with its sheer natural beauty make it a fascinating and fabulous vacation destination. The Grand Sicilian escorted tour covers all of Sicily’s most popular attractions.

The Grand Sicilian trip itinerary includes visits to ancient Greek Temples in Agrigento, ancient Greek archaeological sights in Taormina and Siracusa, a visit to a Roman villa in Piazza Armerina to see its ancient Roman mosaics, Sicilian Baroque architecture in Ragusa, and the Norman cathedral in Monreale famous for its Byzantine mosaic. The tour itinerary sightseeing highlights include unique Sicilian experiences and included meals while traveling from Palermo to Erice, Marsala, Agrigento, Modica, Noto, Monreale, Siracusa, and Taormina. Over its 3000+ year history the Sicilians maintain the best of the old while always reinventing itself. In each town you’ll enjoy the Grandeur of Sicily brought to life by your expert guides while staying in 4-star accommodations. For more information or to book your Grand Sicilian submit the form. 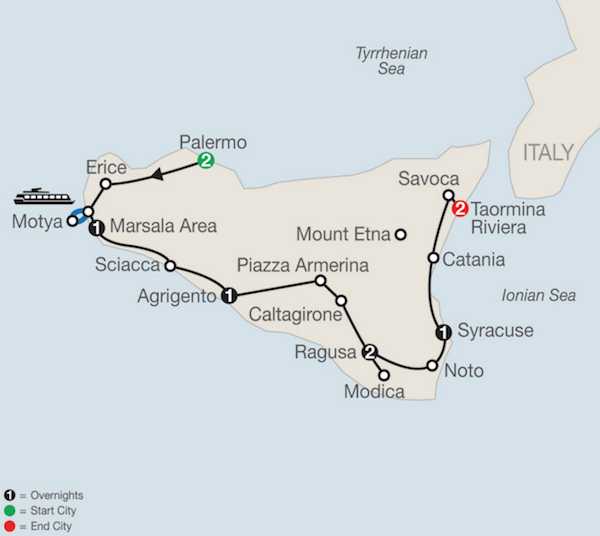 Sicily’s sightseeing highlights span all historical eras. During the Magna Grecia Hellenic civilization flourished on the island of Sicily and around southern Italy. The ancient Romans adopted some of their customs. Ancient Greek Temples and theaters later updated by the ancient Romans provide incredible windows into how the ancient civilizations evolved here. Medieval Norman architecture, to the Sicilian Baroque are all remnants of the island’s middle age colonizers. The Grand Sicily vacation itinerary includes an exploration into all the culture that inhabited this stimulating island.

The tour includesFull breakfast daily; 1 lunch in Palermo; 6 three-course dinners, including dinners at local restaurants in the Marsala area, Modica, and Taormina.

See below for the daily itinerary.

The optional excursions are not included in the tour itinerary. They are scheduled during what is otherwise free time. The price will be confirmed before final payment. The selection is subject to change.

Get a true taste of ancient Palermo, capital of Sicily, on this fantastic excursion featuring an exclusive visit to a private noble Palazzo followed by a real Sicilian dinner at a local restaurant.

Experience the ancient wonders and impressive Greek ruins of Ortigia Island, historic center of Syracuse, on this exciting guided tour that concludes with a pizza feast at a local pizzeria.

Price published is land only price. For price of Grand Tour of Sicily with airfare enter airport closest to your home and submit form.

Depart the United States for Italy. Typically your flight will be overnight. Enjoy dinner and then breakfast on board the airplane. Most flights include video entertainment.

Upon arrival in Sicily you will be transferred from the airport to your Palermo hotel. Enjoy the balance of the day independently. This evening you’ll meet your tour manager and accompanying guests while enjoying your first authentic Sicilian dinner.

DAY 3 – Discover the Normans in Palermo and Monreale

Discover the capital of Sicily with an expert local Palermo tour guide and enjoy a panoramic view of the Conca d’Oro. Visit the 12th-century Norman Cathedral in Monreale, famous for its enormous byzantine mosaics. Back in Palermo, see the major sites like the ornate Piazza Bellini, Capo Market, the baroque Church of Immacolata, and visit the magnificent Palermo Cathedral. Today includes lunch with Sicilian specialties like panelle (chickpea fritters), arancini (stuffed rice balls), and cannoli (fried pastry rolls with sweet ricotta cheese) awaits.

Join your Tour Director for an orientation of the hilltop town of Erice, ending at the well-known Pasticceria Maria Grammatico to savor the traditional almond biscuits and Marsala wine. Next, visit a traditional Mediterranean sea salt mill. Then, the highlight of the day is a relaxing boat to the island of Motya for a perfect view of the lagoon and visit to its Museum. Later, dinner with local specialties and couscous will be served.

DAY 5 – Marsala to Sciacca then Agrigento

In Sciacca, take pictures from the panoramic viewpoint before continuing to Agrigento. Here, your Local Guide will take you for a spectacular walk through the magnificent Valley of the Temples. Even travelers who have visited Athens and Delphi are awed by the gigantic yet graceful Greek structures that miraculously survived 2500 years of history.

Drive to Piazza Armerina for your guided visit of the Villa Romana del Casale, a UNESCO World Heritage Site. Admire the largest and most complex collection of Roman mosaics in the world, including the famous “Bikini Girls,” discovered in 1960. Before arriving in Ragusa, stop in Caltagirone and see the mosaic staircase of Santa Maria del Monte, covered with different tiles in a beautiful pattern.

Guided sightseeing features a walk through Ragusa’s oldest district, the IBLA, a UNESCO World Heritage Site with its beautiful palaces and churches. Walk through the Giardini Iblei, the pleasant public gardens laid out in the 19th century and then, visit the iconic baroque St. George Cathedral. Time on your own to further explore or maybe relax at an outdoor café! In the late afternoon, travel to nearby Modica with its steeply stacked medieval center and spectacular baroque churches. Wander along Corso Umberto I and stop at the famous Dolceria Bonajuto, Sicily’s oldest chocolate factory, for a tasting. End the day with a dinner at a local restaurant.

DAY 8 – Ragusa to Noto and Siracusa

The baroque town of Noto is renowned for its beautiful historic center that was almost entirely rebuilt in the early 18th century following the 1693 earthquake. Meet your Local Guide for a walk along Corso Vittorio Emanuele to admire the magnificent architecture, and visit San Nicolo Cathedral. Continue to Syracuse, birthplace of the mathematician Archimedes. Enter the archaeological site for a guided visit of the 5th century BC sparkling-white Greek Theater, the Garden of Paradise, the Ear of Dionysus, the Altar of Hieron II, the Roman Amphitheater, and the Cordmakers’ Cave. Tonight, you may wish to join an optional excursion.

DAY 9 – Catania to Savoca and

In Catania, see St. Agata Cathedral and spend some time on Piazza del Duomo and Via Etnea. In the village of Savoca, see the Church of Santa Lucia, made famous as a location for Michael Corleone’s wedding in the movie The Godfather. Enjoy a granita and brioche at Bar Vitelli. Later, arrive at your hotel on the Taormina Riviera.

In the morning, an exciting optional excursion is available to Mount Etna, the largest active volcano in Europe. Later, in hilltop Taormina, visit the ancient Greek Theater, dating back to the 3rd century BC. This evening, a farewell dinner will be served at restaurant Villa Antonio, an excellent way to say arrivederci Sicilia!

Your Grand tour of Sicily ends this morning with breakfast and transfer to the Catania airport. Fly home full of fond memories. Or continue your Italy vacation.

For more Italy vacations check out our Italy tours page.

* When all-inclusive Italy vacation prices are quoted to include airfare the price includes fuel surcharges, airport taxes, Italy airport transfers and fees. All prices are per person based on twin occupancy. Italy tours with air & land tour prices apply from the gateway airport. Prices will vary from alternative gateway airports or cities and may be higher. The total price will be emailed to you prior to any deposit being required. Airline baggage fees may apply. Please review all terms and conditions before booking.