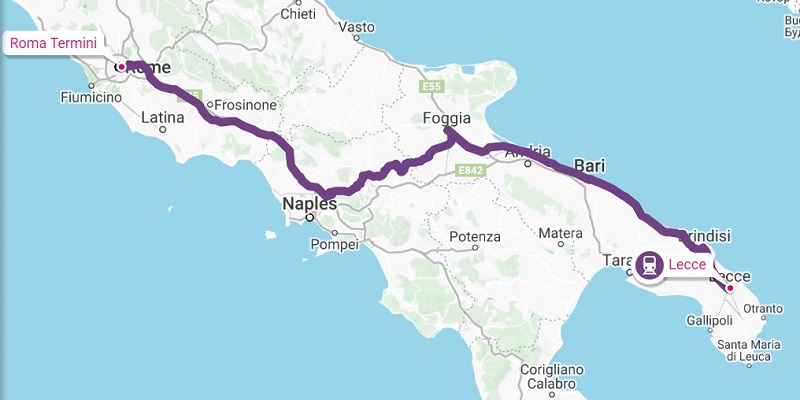 Our trip to Rome from Lecce, located in the Puglia region, – every mile of our train ride and our journeys fills our eyes, minds, and hearts with new experiences and insights into this beautiful country.

The train path in southern Italy passes olive groves that provide some of the world’s best oil and farms that fill markets, homes, and restaurants with fresh, delicious produce cover and color the countryside.

Bright yellow and orange wildflowers, palm trees and centuries old palazzi mark the countryside along the train tracks separating you from enticing long distance and beautiful views of stunning blue ocean for miles and miles.

Forget reading, playing games, or using your cell phone or even sleeping – the richness of the environment and its history is captivating.

This train to Rome comes with an odd twist. After speeding north for several hours, it pulls into the Foggia station, and departs by backing up to the south.  The rear car of the train is now the front car; seats that once faced forward, now face backwards.

The steward smiled patiently when I asked if this train was indeed going to Rome.

After servicing Foggia, the train evidently needs to loop south and then west to navigate through the Apennine mountains which have separated the people of east and west Italy for millennia before it can progress north.

The reverse loop also provides service to several cities, one of which is Caserta.

Looking out the train window at the Caserta stop, one sees an unreal image. It is the massive Royal Palace of Caserta, one of the largest royal residences in the world with over 2.5 million square feet of floor space, 70 million cubic feet, in 1200 rooms on five floors.

Construction began in 1752 for Charles VII of Naples, and his court.  Starting in 1943, during the allied invasion, the royal palace served as Allied Force Headquarters for the Supreme Allied Commander in the Mediterranean area, a significant upgrade from his former tent.

Even fewer than 24 hours in Rome is fulfilling. One never quite gets used to being surrounded by such history and inescapable beauty everywhere. To the city’s credit, increasingly Italian culture not only cares for centuries of great art, but continues to celebrate contemporary art and artists with new museums, concert halls, and innovative art spaces. I feel “renewed” by its rich past and present treasures every time I am in Rome.

How to Travel by Train From Lecce to Rome

About Traveling through Southern Italy

About Italy Vacations with ItalianTourism.us

ItalianTourism.us provides the largest selection of hand-picked tours to Italy. For more information about tours that include Rome and Southern Italy click here.

Dolce Vita is an American of Italian descent currently living in Lecce. Lecce is located in Southern Italy in the heel of the Italian Boot. Stay tuned for more notes from Dolce Vita and her experiences living the “sweet life” in Italy.